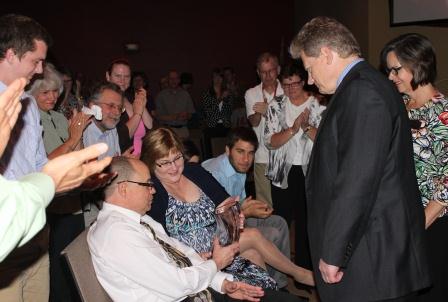 More than 150 well-wishers were on hand to see former Loudonville bank president Jim Lingenfelter receive the Heart of Giving award from Samaritan Hospital Foundation on Thursday.  The occasion was at New Hope Community Church, an organization which Lingenfelter was involved in from its inception in the early 2000s. Lingenfelter, who fell ill nearly three years ago, sat with his family in the front row.  The presentation included a video reviewing Lingenfelter’s career and community accomplishments, both in his hometown of Loudonville and across Ashland County.  Lingenfelter was fondly  remembered as “the guy that would do anything for a customer or a cause,” presenter Bev Spreng of Samaritan Hospital Foundation said. “Anything” included walking behind horses in parades with a scoop shovel, serving as the official trash gatherer at Mohican Winefest, shaving off all his hair for United Way, dressing up like a girl for Relay for Life, coaching pee wee football and youth soccer and donating his carpentry skills to build sets for school plays.  For his selfless community involvement, Lingenfelter was winner of the 2001 Loudonville-Mohican Community Service award. He took on leadership roles in the formation of New Hope Community Church in Loudonville, and later in Ashland and Wooster.  He was a founding director in the countywide economic development initiatives that led to creation of Mohican Area Growth Foundation and Ashland County Council on Economic Development.  Lingenfelter became known in the northern part of Ashland County as a person instrumental in building bridges and relations between the north and south ends of the county.  Jack Vanosdall, who chaired the Ashland Area Chamber of Commerce board when Lingenfelter served on it, said, “Jim has the rare skill of consensus building among diverse groups and interests.”  Along with, then Chamber director Jayne Cooper added, “the knack of turning any event into a good time!”  For his dedication and service, Ashland Area Chamber of Commerce presented him the Spirit of the Chamber Award in 2004.  Mark Smith discovered the Wolf Creek/Pine Run Grist Mill site in 1999, and reportedly asked around Loudonville for folks to help him with a mill restoration project.  He was immediately pointed to Lingenfelter, who helped him get the effort under way.   Smith later called him “the best guy I have ever known.”  Lingenfelter lives in Loudonville with wife Elise, whom he dated for nine years before they were married in 1990. They have three children, Loren, Jim and Erin, two foster daughters, and played host to several foreign exchange students.  “He is a builder of community, of business, of churches, relationship and character,” Spreng said in presenting the Heart of Giving Award. “He has built a lifetime of giving to others, and of making life better for everyone that shares his world.”  Tim Cowen, his high school classmate and a fellow member of the 1975 Redbird football team, now a member of the Samaritan board of directors, presented the award, calling his teammate and longtime friend “a builder of community and a legacy for generations to come.”  Barb Burd, president of Hugo and Mabel Young Foundation, presented a framed resolution to Lingenfelter for his 21 years on the foundation board, with 10 as its president.  “For his exemplary service, we have named Jim an honorary board member,” Burd added.  In response to the presentation, Elise Lingenfelter expressed thanks from the community. “You, the community, are like the heart and the blood flowing out and through. Because of the love we felt from this community, we came back to Loudonville while never intending to. Now, what would we do without all of you?”  After his wife returned to her seat, Jim stood up and gave her a hug.