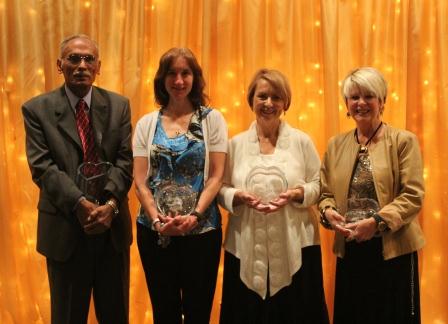 Samaritan Hospital Foundation recognizes and thanks those that make a difference and touch lives in the community.

Individual and corporate donors were recognized and thanked for their contributions to the Samaritan Hospital Foundation at the Heart of Giving Donor Appreciation Dinner held at Samaritan on East Main on November 1st, hosted by Samaritan Hospital Foundation (SHF).  The theme of the event was a celebration of the spirit of stewardship and philanthropy which touches lives and makes a difference.   String duet, Mary Kettering and Ron Marenchin, played as guests arrived.

Richard Beal, President of SHF, shared with the group of 150 guests, stories about how their support has made a difference and touched lives, including a video presentation on the STEMI ECG system that was purchased for the emergency vehicles in Ashland County by SHF with funds from their annual charity golf outing.  The system detects the most severe type of heart attack from the site of the patient, transmits digital ECG readings to hospitals and specialists allowing for a rapid determination of the best transfer option for the patient.  Saving time saves lives.

Mr. Beal also showed a brief segment of the video “Families Touched by Cancer” produced by Samaritan Hospital Foundation and designed to be used as an educational tool by schools.  The video addresses the challenges faced by families dealing with cancer in their lives and offers suggestions to students on how best to support their friends who are facing this challenge at home.

Beverly Spreng, Development Director for SHF, noted that there are many ways to make a difference and touch lives, recognizing the volunteers and staff at Samaritan Hospital.  AJ Sockwell, a nurse at Samaritan, explained the selection process for the Nursing Excellence Awards and this year’s recipients of the awards were asked to stand.

Four individuals were honored and thanked for devoting their lives to going above and beyond to make life better for others.  Three individuals received the 2012 Time, Talent and Treasure Awards.  Karin Schwan was nominated by members of the STAR Club at Samaritan Hospital.  Karin serves as Chief Nursing Officer and VP of Patient Care Services at Samaritan Hospital.  Mona Campbell is the Office Manager at Samaritan Hospital Foundation and is active on the Board of Directors for Dale Roy School and the Ashland County Council on Aging.  Nancy Davis is a well rounded community servant and leader whose energy and enthusiasm has fueled good works throughout the Ashland community for years.

The 2012 Heart of Giving Award was presented to Dr. Dakshinamurthi, for a 45 year career spent caring for children and their families in the Ashland community.