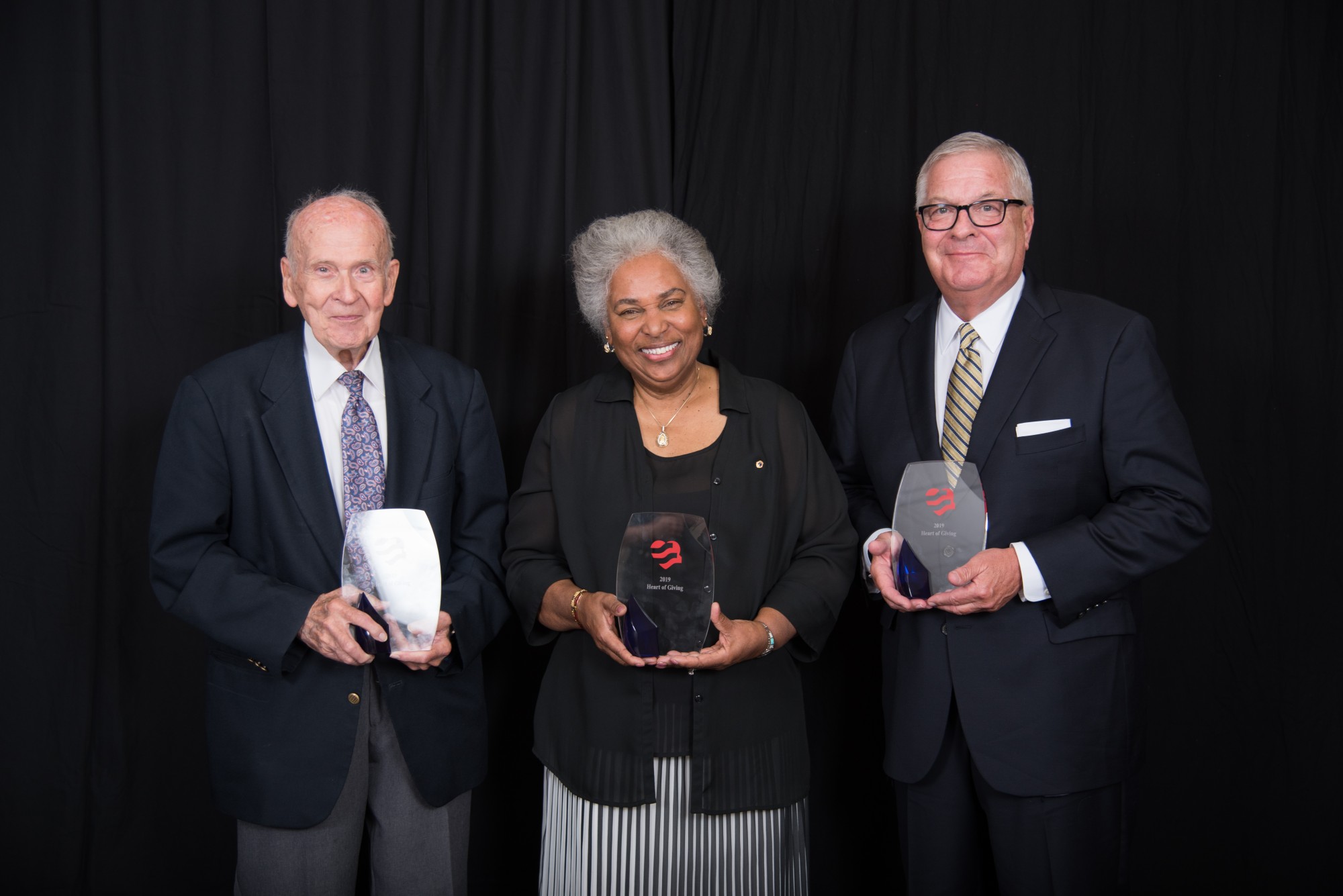 On October 3, a crowd of nearly 200 gathered for Samaritan Hospital Foundation’s (SHF) annual Heart of Giving Dinner. The evening is dedicated to thanking individuals in our community who give generously of their time, talent, treasure and service to help others.

The event began with a series of videos highlighting how SHF grants are positively impacting the health and wellness of individuals in Ashland County.

A few highlights include:

SHF/University Hospital Samaritan Medical Center (UH Samaritan) equipped every law enforcement vehicle from the Ashland County Sheriff’s Department and the Ashland City Police Department with automated external defibrillators (AEDs) and Stop the Bleed kits to help save lives in our community and among our law enforcement on duty. The newly formed Community Emergency Response Team (CERT) also received Stop the Bleed Kits for their 20-member team to include in back packs used in the event of a  community emergency.

The Samaritan Hospital Foundation collaborated with the TW Miller Foundation to bring Stereotactic Breast Equipment to UH Samaritan. Stereotactic biopsy can be more effective in diagnosing cancerous cells in breast tissue by giving the radiologist two images of the breast tissue to more accurately pinpoint any suspicious areas and take a sample of tissue for testing. The new imaging equipment uses mammography to precisely identify and biopsy an abnormality within the breast. A 2011 study found stereotactic breast biopsies to be highly accurate and sensitive, which is very helpful for determining whether or not a suspicious area in the breast is cancerous.

SHF also provided a grant to fund Federal Communications Commission (FCC) reserved 211 dialing code for community information and referral services. The FCC intended the 211 code as an easy-to-remember and universally recognizable number that would enable a critical connection between individuals and families in need and the appropriate community-based organizations and government agencies. SHF is bringing back 211 by funding the service for three years with the expectation that the social services, city, and county agencies will ensure it continues.

During the Heart of Giving Awards portion of the event, SHF recognized three individuals in our community for their compassion and faithful service to make a difference in the lives of others:

Melody Barnes was honored for her lifelong service caring for individuals with special needs and giving back to the community. She has been a very active member of the Knox County community and has continued her volunteerism in Ashland County through. Her lifetime of serving the communities in which she lives includes leadership roles for the American Red Cross including extensive training in disaster response, the Lions Club, the Exchange Club, and through chairing many projects serving the youth, the elderly, and those in need.

John Rowsey was honored for a lifetime of giving back of his time and talents both overseas and back home in Ashland. He served for many years in the mission field as a sound technician producing radio Bible programs in Argentina and quietly supporting local businesses and non-profit organizations in Ashland such as United Way, Lions Club, and the Chamber of Commerce through his computer business, InfoPro. Over the years, he has faithfully volunteered at his church, Garber Brethren Church, teaching Sunday school, running the sound system, tracking the finances, driving people to church and maintaining the building, and currently serves as the Parkinson’s Support Group leader in spite of his own battle with the disease.

SHF also recognized Paul Myers, SHF Chairperson, and the significant impact he has had on SHF’s ability to support countless charitable organizations in our community. According to SHF President, Richard Beal, “In 2002, under Paul’s leadership, we set a goal to increase the Foundation assets to $50 million over a 15-year period, and then to fund healthcare needs in Ashland County at 4% per year of the Foundation’s invested assets going forward. This goal was reached in 2015, several years earlier than expected. In just the last four years since then, while Paul has served as Chairperson of SHF, we have distributed more than $8 million dollars for the health and wellness of our community. And by 2025 that total will increase to more than $20 million! Without Paul’s leadership and service on the Board, that would never have happened.” During Paul’s tribute, one by one local charitable organizations were asked to stand to show the magnitude of his contributions and the many lives that are being helped by his service.