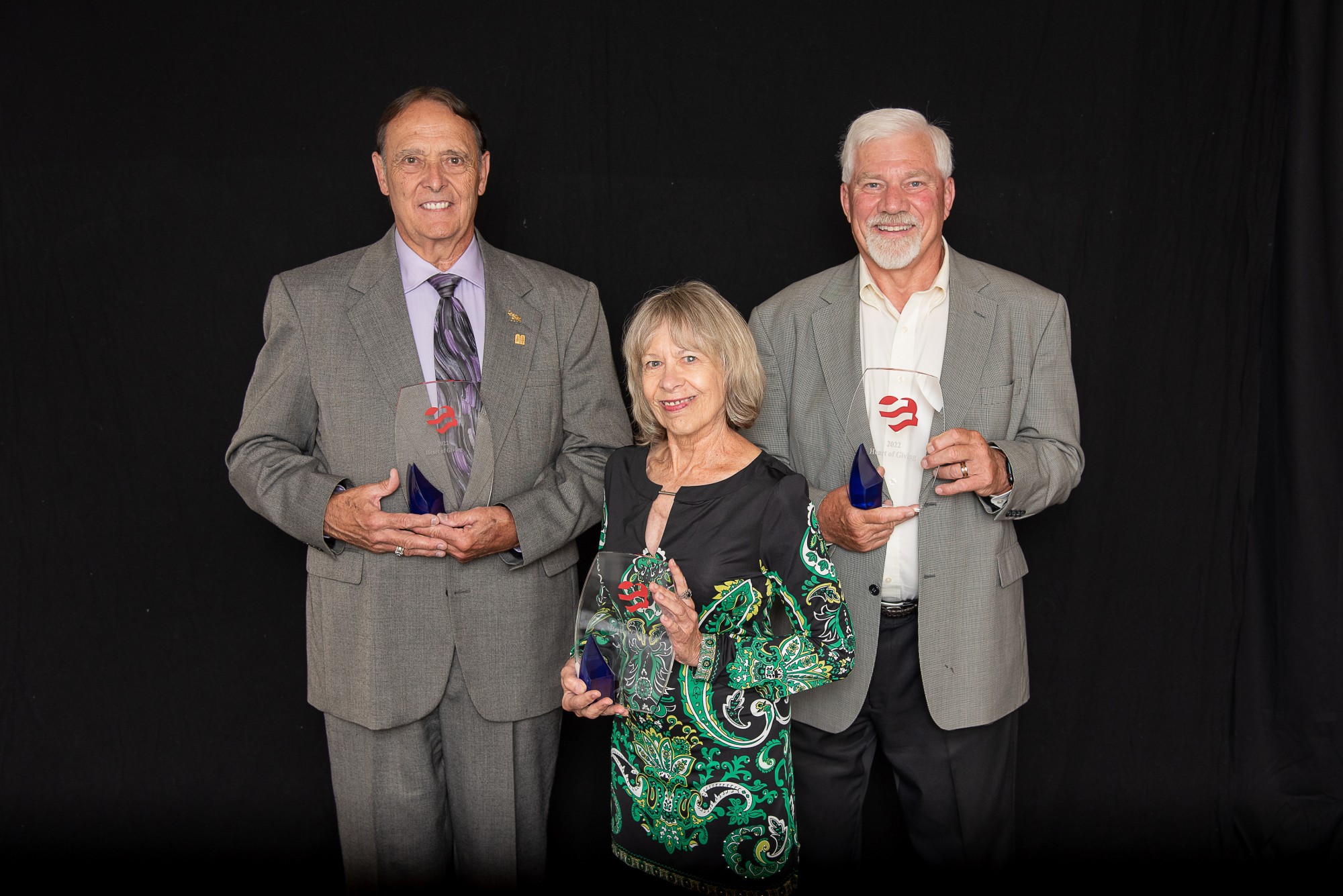 On August 4, after being rescheduled twice due to the pandemic, a crowd of nearly 200 gathered for Samaritan Hospital Foundation’s (SHF) annual Heart of Giving Dinner. The evening is dedicated to thanking individuals in our community who give generously of their time, talent, treasure and service to help others.

In keeping with supporting those entering the nursing profession, SHF honored Brenda Winland, LPN, at UH Samaritan Medical Center for her 50 years of service. UH Samaritan COO, Sylvia Radziszewski, was on hand to present the award. According to Brenda, “I have met and learned from some of the greatest educators, doctors, nurses and other staff through the years. I thank God for the privilege and knowledge to become a nurse, to have such a rewarding career for 50 years at Samaritan caring for the sick, working with some of the most precious people one could meet including the best professionals in the medical field, and to serve my community.”

SHF also recognized retired Police Chief, David Marcelli, with the SHF Community Service Award for consistently demonstrated an unyielding dedication to community service, and to improving the lives of others during his 29 years of service.

The event continued with a series of videos highlighting how SHF grants are positively impacting the health and wellness of individuals in Ashland County and the hospital.

A few highlights include:

SHF donor funds support treatment for veterans with PTSD through the Silent Watch Program, which was founded in 2009 after Ashland native and retired Master Sgt. Tim Chandler lost two veterans he had served with in Afghanistan to suicide. The Silent Watch Program is meant to break the stigma surrounding mental health issues and PTSD that often plague those who have served and create public awareness of veteran suicides to hopefully get them the help and assistance they need. The Ashland program also offers veterans and first responders suffering from PTSD a simple procedure called SGB (stellate ganglion block) to help reduce levels of anxiety, depression, and sleeplessness and brings these symptoms to tolerable levels. The treatment is not currently covered by insurance or the VA. For more information, visit the Silent Watch website at silentwatch.org, call 419-571-6900 or email silentwatch22@gmail.com.

Another SHF grant enabled the purchase of curved paddles for UH Samaritan facilities that greatly reduce mammogram discomfort. The curved paddles make the mammogram experience more comfortable for patients by reducing the pressure experienced during the procedure by 50%.

SHF was deeply honored to sponsor two Honor Bus trips to Washington DC for 28 local veterans. With the support of local businesses and foundations like SHF, the Ashland Honor Bus is able to take area veterans on trips to DC each Fall to honor their service and sacrifice.

During the Heart of Giving Awards portion of the event, SHF recognized three individuals in our community for their compassion and faithful service to make a difference in the lives of others:

John Shultz was honored for his lifetime of taking the time to invest in the lives of so many—from a young boy hearing God’s call while driving a tractor on his family’s farm, to pastor, then professor at Ashland Theological Seminary and counselor as a licensed psychologist, and president of the Seminary. He retired in 2016 after 35 years of servant leadership to students and colleagues at the Seminary, and now an Ashland Seminary Foundation Trustee, serving and counseling people and preparing future leaders for discipleship. In total, John has devoted nearly five decades to equipping Kingdom workers and counseling those in need.

Carl Richert, retired Ashland County Sheriff, was honored for his 40 years of service to the Ashland community. His early passion for firefighting and helping others led to more than 49 years as a volunteer firefighter for the Ashland Fire Department and then Polk Fire Department. As Ashland County Sheriff, Carl prided himself on being the first person on the scene of any call dispatched in the county because of his desire to help others.

Nancy Wasen was recognized for paying it forward to others battling cancer as a volunteer for the past 10 years at Pelotonia, a three-day bicycling event to raise funds for life-saving cancer research, after she survived stage 4 throat cancer. Nancy had been serving others long before her diagnosis. For 20 years she organized benefit rock-n-roll concerts, raising funds for Hospice of North Central Ohio, Ashland County Cancer Association, and Safe Haven/Rape Crisis Center. She also formed a Neighborhood Watch program, works as a volunteer at Ashland Local Roots, instituted a recycling program for the Ashland County Fair, and volunteers and supports the Cat Sanctuary.